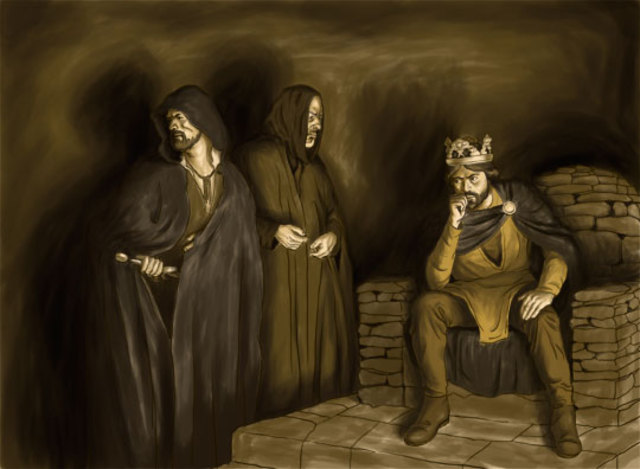 Continue reading. Act 1 Plot: When the play first opens we hear 3 strange witches standing in a field while it is thunder and lightening. They begin to chant spells and talk about their meeting with Macbeth as they vanish into thin air. Not to far from the field, there is a battle taking place, the King of Scotland is there with some of his followers. The king is much to old to for himself, so he sends to hear how his army is doing. A badly injured soldier then returns from battle to tell Duncan how dreadfully bloody it is but how saved the day by fighting and killing many of the rebels and their leader.

The Thane of Ross soon arrives bringing more news about the Thane of Cawdor; he claims he is a traitor. Once Duncan learns that he has won the battle, he orders that the Thane of Cawdor be executed and killed leaving Macbeth to take over his place. Before Duncan had the time to reach Macbeth with the good news, the three witches approach him and Banquo. The greet Macbeth with three different titles: Thane of Glamis, Thane of Cawdor and King Hereafter, but this confuses Macbeth. Flashtool Drivers. Not only do the witches tell Macbeth his future, they also tell Banquo that although he will never be King, his children will be and then they vanish once again. As Banquo and Macbeth joke about the, Duncan’s messengers interrupt them and tell Macbeth that he is now the Thane of Cawdor, he is no longer laughing about the witches and their predictions.